All to often we see people on forums or social media, with Japanese brindled patterned rabbits, wanting to find a compatible mate in their herd to mate it to; usually to reproduce more of the same colour.

This pattern group is the most popular in pets shops by far, or at least the ones that will sell the fastest.

But what can you do to ensure that your harlies, magpies and tri's are not just pet quality?

Before you begin a basic knowledge of rabbit genetics is desirable. If not have a read anyway and ignore the 'abcdefg.....' (as some put it) as you should still be able to grasp the basics.

A basic run down of rabbit colour inheritance - click through.
The Japanese brindling gene is responsible for magpies, harlies and tris. It basically creates a striped/ block effect (or mottled in the case of tris) This gene sits on the E Locus. A brief explanation of the Locus below.

The E series very simply governs the distribution of black (or what ever colour is being displayed in its place ie blue, choc, lilac)

In order of dominance (top most dominant, bottom least)
Es- A steel rabbit (more than the normal amount of black).

E-normal distribution as in self, agouti or otter/ marten.

So we have already established that you will need your most dominant allele on the E Locus to be ej (Japanese brindle).

The difference you will notice from Harlie to Magpie is what is going on with the C Locus. 'cchd' or 'the (dark) chin gene' strips away the orange colouring and replaces it with white.

Here is a brief explanation of the C Series which governs black and yellow pigmentation.


It is important not to deviate away from using dark chin (cchd) in this instance. I have seen sable magpies and they just look mucky, exhibiting shades of brown and sepia.

So if you have a harlie, quite simply by putting a orange butterfly or fawn butterfly to it will create your very own tris!

An absolute no no for tris is mixing dark chin (as found in magpies/ chins). In short don't mix your magpies with your tri's or later on you'll regret it. You could end up with a black and white spotted rabbit.

As for getting the pattern right, your on your own! It is said that two well marked rabbits do not necessarily create the same. Yet two poorly marked rabbits can be put together with wonderful results. Pattern is more like the chaos theory! 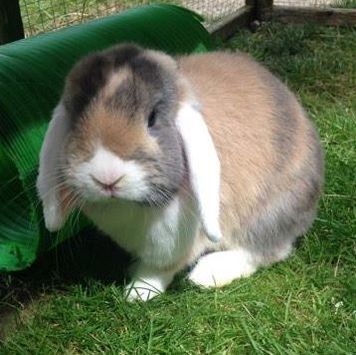 Photo with thanks to Laura Irven
With the rise in the pet industry of  'splits' (Vienna marked/ carriers), breeders have discovered something very similar to tri dutch!

It has often been speculated that dutch markings have similar origins to the Vienna heterozygous marking 'Vv' (one dose of b.e.w.)

​As you can see the rabbit to the right is both Vienna 'split' and has normal presentation of harlequin (albeit blue harlequin)
A harlequin butterfly however would be spotted or mottled.