What we look for when assessing a potential Mini lop or Lion lop show rabbit?
​
Over the years we have often been asked for our opinion and guidance regarding the type of a mini/lion lop.
So we have made this document that we hope you will find useful.
When assessing the rabbit try to look from all angles, step back from the table, look from above.
All the best judges do, as you see a better overall picture.
You also get to notice subtle moult line, or if additional grooming is required.
There are many parts that make up a good show rabbit.
Below has been broken down in to sections to help you better understand what to look for.
Remember nobody has the perfect rabbit, some rabbits you could consider 'part' rabbits, in as much as they could be used to help work on improving your breeding programme in areas of weakness.
However, it is not a five minute fix and may take several generations to get all the parts to gel.

NO AMOUNT OF POSE TRAINING WILL HIDE FAULTS FROM A JUDGE WORTH THEIR SALT.
A well formed rabbit will sit/pose correctly with little handling. To some extent one can train a rabbit to pose which is ideal as some are fidgets. However, no amount of training an animal to sit a certain way will make it appear good to a judge. Owners, stewards and judges can sit mini/lion lops so high/short that the front legs are tucked inside the back legs! A rabbit that naturally sits well is one that has all the 'parts' in the right places i.e. it conforms to the standard. 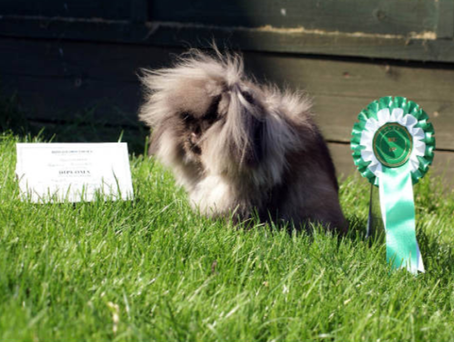 Rest of the breeds description (in red = Lion Lop)
Colour and Pattern - Any colour or pattern accepted by the Breeds Standard Committee of the British Rabbit Council apart from the broken pattern.
Condition - The exhibit should be in a perfect state of health and bodily condition, free from all soiling, particularly on the feet, ears and genital parts. The coat should reflect the overall good health of the exhibit, which should appear alert and vigorous.
FAULTS - Long coat on ears and body, excessively short or long mane. Body too long; head not sufficiently characteristic of the breed; pimpled or damaged ears; poor ear carriage; ears folded; crown not developed; fly back coat; large dewlaps in does; rear feet not parallel to the body; light soiling of feet, ears and genital organs; bare pads; fur slightly soiled or matted; long toenails; lack of vitality.
DISQUALIFICATIONS - Complete lack of mane. Maloccluded or mutilated teeth, over weight limit, deformities and mutilations, deformation of the teeth, feet bowed or bent, white toe nails in coloured exhibits, white nose on butterfly pattern, crooked tail, any discernible illness or disease, blindness or partial blindness, incorrect eye colour,any parasitic infection, much soiling, matted coat, sore pads (where skin is broken or scabbed); any evidence of irregular preparation for exhibition including trimming and dyeing.